(Designing an Electronic System to Assist The Blind) an Outstanding Graduation Project Prepared by Students of the Department of Communications Engineering at Al-Wataniya Private University - الجامعة الوطنية الخاصة -w.p.u -
Search 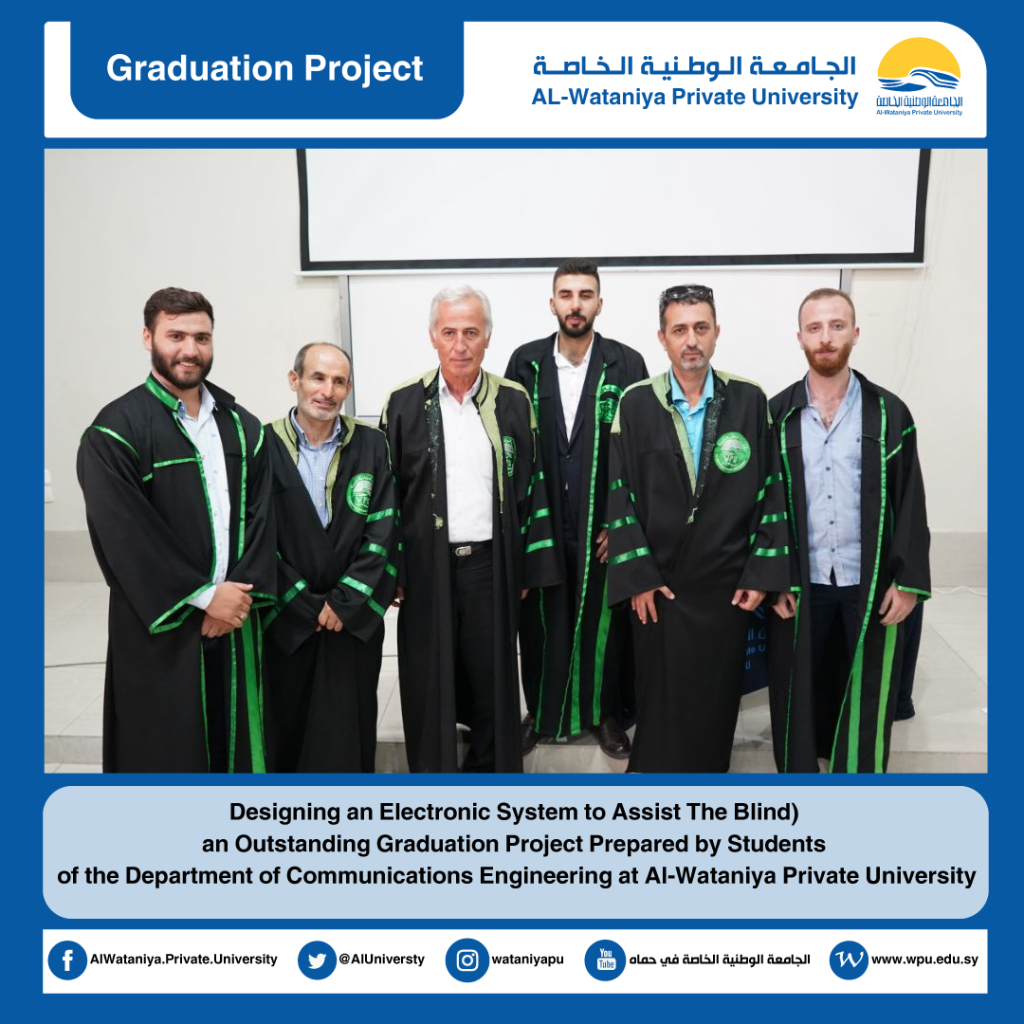 The Faculty of Engineering – Department of Communications Engineering – at Al-Wataniya Private University witnessed discussion sessions with a distinguished batch of students, in which the title of a unique graduation project “Designing an Electronic System to Assist The Blind” prepared by students , Badr Muhannad Zaarour, Mahmoud Haitham Al-Hayek, and Husam Al-Din Al-Jammal,  and under the supervision of Engineer Prof. Thaer Daoud.

The project aimed at designing an electronic device that would enable the blind to perceive people and the objects surrounding them, whether near or far, and identify their colors, and enable them to determine the time and date, making it easier for the blind to avoid the obstacles they encounter.

In the same context, Eng. Mahmoud Haitham Al-Hayek, one of the project’s organizers, said: “The device works through the use of a special camera and algorithms that allow the blind to recognize faces,” explaining the new mechanism by which the electronic system works by generating audio words,  that the blind can hear through their ears or by  an external headphone.

Mahmoud Al-Hayek stressed the most important features of this newly developed electronic system as it has a low financial cost, taking into account the high costs of ETA devices in circulation and the difficulty of owning them by people with limited income, and on how the device works, Al-Hayek indicated that the project was implemented on the Raspberry_pi board, which is characterized by speed  Processing and thus the ability to recognize faces and process images faster and better.

For his part, Eng. Badr Muhannad Zaarour explained that this work is  based on the principle of “science in the service of humanity”, so the system was designed to work in real time and high response speed, in addition to being easy to carry and use by the blind.

Creative ideas see the light at Al-Wataniya Private University, and open the doors to adapting scientific knowledge and practical experiences to serve the human being. Believing in the importance of employing such pioneering work to serve the community, Al-Wataniya Private University, represented by its President Dr. Ahed Khuzam and its educational, administrative and technical cadres, seeks to refine these experiences and work to support them in all possible ways.